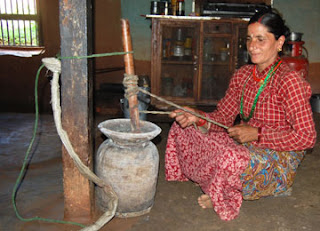 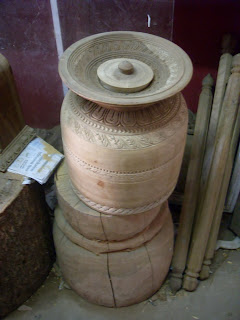 Theki is locally made by people from wood and is usually used to store milk fat (Taar), make butter (i.e NAUNE GHYU)out of it; which can later be cooked to make the clarified butter also known as ghee and also make buttered milk (i.e MOHI). The "Theki" is only a vessel, where as the "Madani" is like a thick stick with turbines at one end.
To make all these products we first need to keep the "Theki and Madani" near a pillar so that Madani can be tied very loosely (infact right parallel to the pillar). The "Madani" than needs to be wrapped around spirally by another rope in such a manner that when you pull one side the other gets smaller (if that makes sense just like a hand exercise !!!). The "Madani" is then kept inside the "Theki" with milk fat in it. Slowly the person starts to rotate the "Madani". As there are turbines present it works like a mixer grinder and separates the fat and the butterd milk. The fat floats on the top which is collected either ready to eat or make clarified butter and the buttered milk remains at the bottom ad is usually sour but thoroughly enjoyed by everyone including me!!!!!!
Posted by Reecha Reecha at 00:09 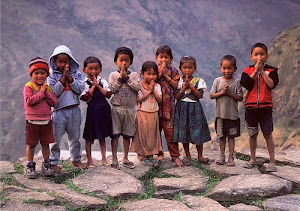 All that we are proud of.